We’ve spoken frequently here on the site before, about the importance of specificity in your squash training. Trying to simulate the demands of a tough rally and replicate overall the unique energy requirements of the game in your conditioning sessions, should be one of your key focuses. A great way to do this is to incorporate some shot & ghost patterns into your training.

To enable our squash conditioning work to be able to maximally enhance our performance, we need to ensure that what we are doing has as much carry over to a match environment as possible. Drills such as ghosting and court sprints are often some of the best to base our on-court conditioning workaround, as they’re mirroring the movements and energy systems that we use in a game, as well as being simple and straightforward to carry out.

With shot & ghost drills, we’re enhancing that specificity still further by actually bringing some structured hitting into the routine as well. By working with a coach or partner, you can tailor your standard ghosting drills to include a feed for a shot in sequence between each of your ghosting movements.

A basic example would be to ghost a backhand drop in the front corner, then come back to hit a forehand drive from the opposite back corner off of your partner’s feed. For the next set, the shot and ghost would be switched, so this time you ghost the forehand from deep and then play the backhand drop off of your opponents feed from the front.

As illustrated by English PSA star James Willstrop choosing ‘A Shot & A Ghost’ as the title for his 2012 autobiography, this routine is a favourite of players of all levels the world over. There are countless ways you can structure a shot and ghost routine, to enable you to really focus on your movement in and out of the four corners in parallel with working on the technique of your chosen shot. By adding in the element of movement away from and back to the T on your ghost, the actual hitting of the shot becomes far more match-specific – this makes it an ideal way to progress a standard technique practice, moving away from a basic repeated hit off of a feed and introducing the elements of movement and accumulated fatigue as would be present in a game.

If you’ve been practising your forehand volleys off of a coach or partner’s feed for example, the shot & ghost routine is the perfect next step to bring the hitting of that shot into a more realistic match-specific environment, by adding in a ghost to one of the four corners of the court between each shot.

The sets/reps structure of a shot & ghost routine are as flexible as the shots and movements that you choose. The three main ways to structure the volume of the drill would be:

Time – the shot/ghost pattern is carried out for a set period, usually anything from 30secs to 3mins+

Shots – each shot/ghost is counted, up to a total of anywhere between 10 and 50+ repetitions

Rallies – the shot/ghost pattern is carried out for a duration of 15–60secs as controlled randomly by the feeder, interspersed with 10–15sec rest periods before resuming (mirroring rally length/breaks typical to a standard match)

The amount of sets you complete and the variety of shots and ghosting movements that you use, will depend on your level of skill and physical conditioning – start perhaps with just 4 basic combinations such as ghost FH drop & hit BH drive, ghost BH drop & hit FH drive, ghost FH drive & hit BH drop, and ghost BH drive & hit FH drop for example, and have you and your partner complete 20 reps of each (10 shots and 10 ghosts). Alternate between each partner working, so you can use the time whilst feeding as your recovery before going into your next set.

The shot & ghost drill is a great way then to make your training session as specific as possible to the requirements of a game – making you work hard physically with your ghosting movements, but also working in the actual hitting of various shots to practice playing the ball whilst under a little more physical pressure than is usually the case in a more standard technique-based feeding drill. Give it a try, and let us know your favourite shot & ghost combinations and sessions in the comments. 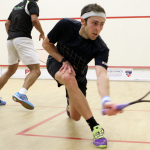