In this next instalment Common Amateur Faults, I will be looking at the concept of reactive movement in the game.

Now let’s compare this definition to the definition of proactive movement:

As you can see from these two definitions, they are polar opposites of each other. Take a moment and have a think about where on this continuum you currently sit in your game and if you need to make some changes to the more proactive side? I tend to see a lot of amateur players be a lot closer to the reactive rather than proactive side and this blog will encourage you to be more mindful of where you are at and to give you some tools to try and be more proactive in your matches.

All too often I observe amateurs being quite quick out of their shot and rushing back to the T. When this happens you have to stop and wait and break all your momentum until your opponent hits their shot. This breaking of the momentum can become costly especially in a physical sense. Doing multiple short and sharp sprints with stopping and starting the whole time is a lot less energy efficient than more of a smooth and rhythmical momentum with the odd blast of speed and acceleration where necessary. Often when I see people get to the T and stop, they also tend to spread their feet wide and get into a lower squat position. This stance also kills any momentum and a tip is discussed later about your base you should be in when about to move.

Amateurs tend to watch their opponents but that’s all they do. I see amateurs being causal observers of what is happening right in front of their eyes. They are not really processing the data right in front of them but merely watching as if a Netflix series on the couch. This links closely to the definition of reactive movement and if the brain is not engaged and studying what is going on, what hope is there that the body will follow? When players watch passively this is a very dangerous place to be. Try and start to zoom in to your opponent and the nuances in their swing, body shape and where the ball is in relation to their body. By doing this and collecting data quickly in the mind, this should start to send signals to the body to be active. I would suggest to try and link the mind and body to your proactive movement and the word ANTICIPATION would be appropriate to use here.

Be willing to get it wrong

To start to get better at being more proactive you may need to get it wrong a few times and go off in the wrong direction. This is no bad thing in the short term whilst you are trying to learn the skill and implement proactive movement. Every ‘wrong’ choice needs to be collected and added to your internal database. Over time your natural instinct will start to get used to what is right and wrong and you will find your decision making as to when to move and where to move to will improve. Just a word of warning, do not be too cavalier with this and try and move off ridiculously early. All this will do will make you frustrated and tired as that could be pure guessing. It’s about weighing up your options and having an ‘educated guess’ as when to move as well as where to move. Embrace the learning process of errors.

Keep your base narrow and stay tall

I have found the best way to ‘trick’ yourself into moving and being quick off the mark is keeping a narrow base with your feet and trying to stay tall. When you get used to this position the first movement tends to be a split-step whereby you have to do a little skip/jump and widen your base to push off all at the same time. This is a really powerful way to keep your movement proactive and gets your body used to a stimulus. You may find if you get to the T early your base spreads a little. If this happens, as your opponent is lining up to play their shot, drag your trailing foot in and get taller. This is a really great way to get the body ‘light’ and in a ready position right before your opponent hits. I find I have to continually remind myself of this in a match but when I do it gives me such an advantage.

Linked to the above tip about keeping your base narrow, you need to dedicate time to practice the feeling of the split step. The narrow base does help a lot in order to activate the split-step and feels like a bit of a cheat code. I would suggest dedicating specific times to work on this and practice. Ideally in ghosting first and foremost and then in some friendly matches/training and finally being mindful in competitive matches. The key to getting this right is the timing you do your split-step. The moment your opponent engages their swing get into a levitated position on the balls of your feet. As your opponent strikes, soften downwards as well as opening your base and pushing off in the desired direction. You will need to practice the timing of the split-step as this can vary as to how late or early you are in position.

Connect the first movement to the arm

Be sure to link your racket arm to the split-step. There is little point doing a great first movement with lots of proactivity but then leaving your arm dangling down and the racket head pointing at the floor. This is all too common at the amateur level and then the swing and execution of the next shot is a bit of a panic. Also, many volleying opportunities are missed and the ability to apply pressure by dominating the T are also missed. It is really worth practising this as well as videoing yourself doing this. You may be surprised at how little your racket arm is activating and working in relation to the feet and the movement. In my mind, these two things need to become closely linked and as the feet activate for the split-step, there is a signal also being sent to the racket arm to get it up and ready on whatever side the ball is.

In summary, the above tips should get you to become more proactive within your movement. You will find when you are proactive with your movement that you will feel more efficient, your fitness levels will be better, you should see the game earlier, anticipation improves and ultimately your own shot choices should be better as you will have time on the ball and be in a lot more control of what you are doing. Have a little scroll back up to the top of this article and remind yourself of the definitions of both types of movements and assess where you currently are and where you want to go with it. Good luck and enjoy!

Then make sure to check out the series where Jesse discusses some common technical and tactical amateur faults, explaining how to make small adjustments that will vastly improve your performances on court! 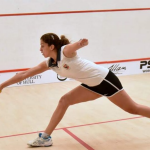 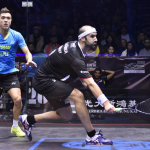 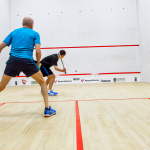 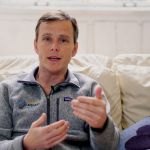